Sardinia and its unique sea in the world

Historical notes, location in the Mediterranean sea, beauty and attractions of the island with particular reference to the sea.

Sardinia is a beautiful island located in the middle of the Mediterranean Sea and is washed by crystal clear water. Hundreds of kilometres of sandy beaches make it one of the most sought-after tourist destinations in Europe, but which still retains all the charm of a hospitable land in which everyone can find their ideal holiday dimension.

A short distance from the most famous tourist resorts such as Alghero, Olbia, San Teodoro and Cagliari you can find the peace and quiet of secluded beaches which are deserted or little frequented even in the busiest months of July and August. 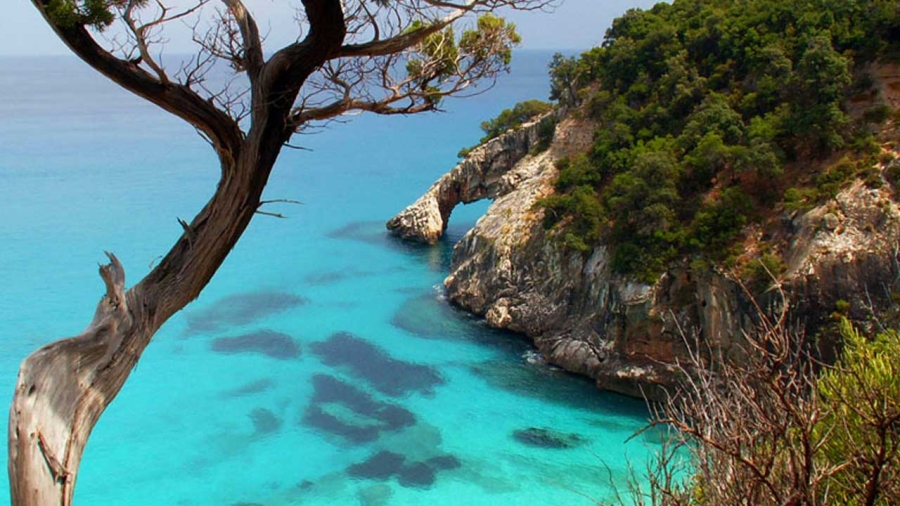 Mysterious, wild, Mediterranean. The very essence of freedom. Dive into the blue of Italy’s oldest island. 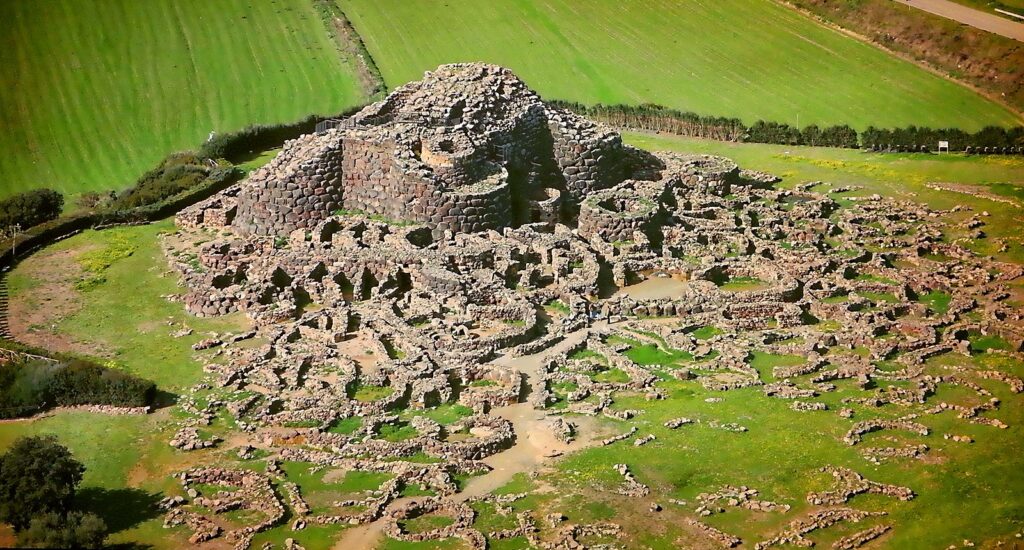 The hilly and mountainous inland areas are scattered with the typical “nuraghe”, stone buildings dating back to the Bronze Age that gave their name to a particular and still in many ways mysterious civilization that was later swept away by the Roman colonization of the island. The Phoenician Punic cities of “Nora” and “Tharros”, located on the south and west coast, are also of great interest. An important example of a Roman city is “Turris Lybissonis” which is located north of the island overlooking the sea and a short distance from the capital Sassari and Alghero.

For lovers of nightlife there are restaurants, pubs and nightclubs concentrated mainly in the most famous places of Alghero and the coast of Olbia.

All these elements combined with the presence of a mild climate, the proximity to major European cities (50 minutes flight from Barcelona and Rome, about 2 hours from London, Paris, Berlin, Amsterdam, etc..) make it an attractive destination at least 250 days a year!

Sardinia is out of time and history. Sardinia is another thing: wider, much more usual, not at all irregular, but vanishing in the distance. Ridges of hills like moors, irrelevant, that are getting lost, perhaps, towards a small group of peaks… Enchanting space around and distance to travel, nothing finished, nothing definitive. It’s like freedom itself. This land does not resemble any other place
David Herbert Lawrence
"

The city of Alghero (about 45,000 inhabitants which become 100,000 during the summer) is located on the north-west coast of Sardinia in what is called the “Riviera del Corallo” and is protected by the promontory of Capo Caccia.

The city has historical Genoese origins. The Genoese were the first to settle in the area where the harbour now stands right in front of the ramparts. From the middle of the fourteenth century the city became first Aragonese and then an integral part of the Kingdom of Spain for about four hundred years until the annexation of the Savoy island with the birth of the Kingdom of Sardinia then became the embryo of the Italian state. 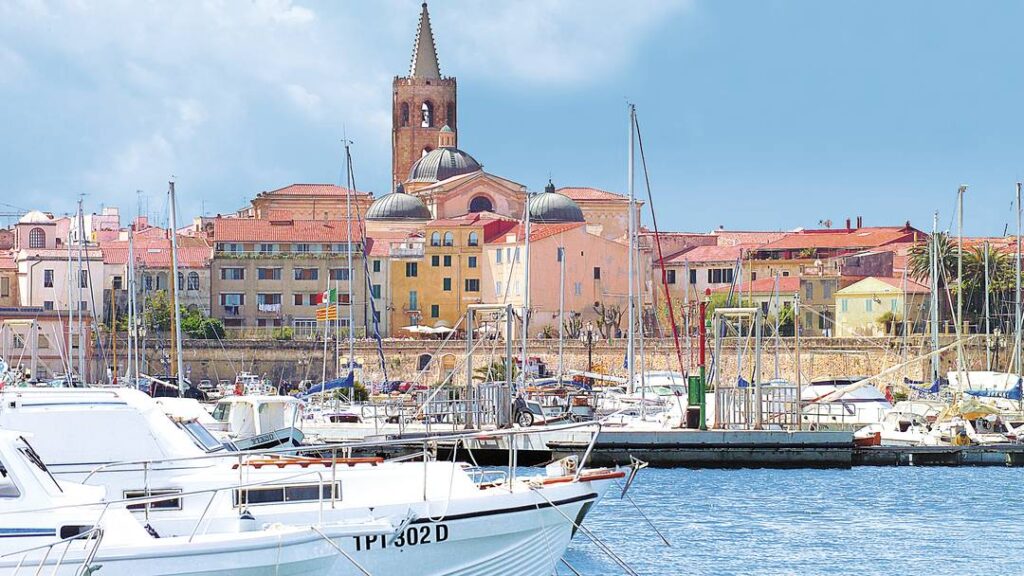 The most "Spanish" among Italian cities. 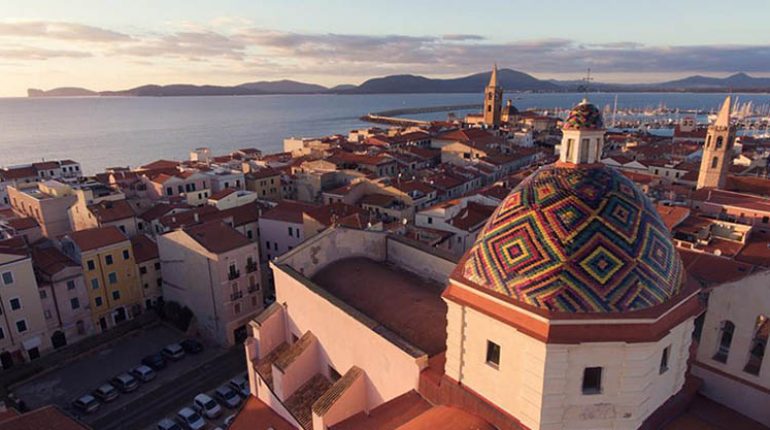 This mixture of architectural styles, with the natural prevalence of the first Genoese and then Catalan imprint, has given the city a picturesque old town characterized by a series of small churches and palaces still very well preserved and a network of lively and colorful streets.

The numerous restaurants, bars and clubs in the city come alive at night with tourists and residents, especially during the summer period. Alghero is certainly one of the fun capitals of the island.

Among the many beaches we remember the enchanting Lido, Maria Pia, Le Bombarde and Lazzaretto.

Sardinian cuisine and specialities from Alghero

The most important specialty of Alghero’s cuisine is lobster: it is prepared in salads, baked, grilled, or used for sauces and gravies that go to season “maccarrones” (a type of pasta) or spaghetti. The countryside around the city offers excellent fruit and table grapes. Sardinian and Algherese cuisine is also traditionally linked to the products of sheep farming and the land: tasty cold cuts, spelt soup, ravioli and “maccarrones” dressed with meat or cheese sauce, skewers and roasts of lamb and kid.

In Cagliari you can find excellent fish cuisine and an equally excellent series of dishes belonging to the peasant and pastoral tradition. Always present is the bread, of excellent quality and with particularities that vary from one village to another of the island. Among the specialties: the typical “fish soup”, the “malloreddus” (gnocchetti di semola served with ragù), the bread “carasau” also called music paper, the “fregula” (semolina soup with saffron and cheese). 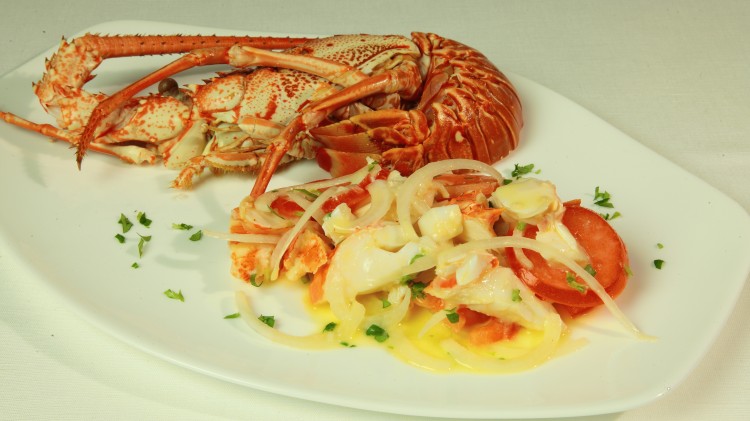 Daily and weekend boat trips all over the “Riviera del Corallo” and the wonderful Capo Caccia.

Guided tours inside the nuraghic complexes of Palmavera and Torralba, the necropolis of Anghelu Ruju, the prehistoric Sanctuary of Monte d’Accoddi and the Roman city of Turris Lybissonis.

Guided excursions by jeep or mini bus to the picturesque mountain resorts of Gennargentu and Limbara, Supramonte in the fantastic gorge of Su Gorroppu (the deepest canyon in Europe) or in the inaccessible and only accessible by foot Tiscali.

Note: A free excursion for all students of Italiano in Riviera! A minimum stay of 2 weeks is required to take advantage of the free excursion. 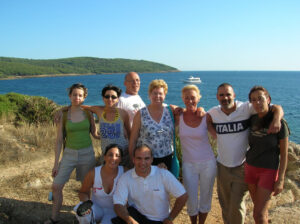